This is a follow-up to the Balloon Launch 1 Report. We received a call from a farmer named Leonard in Newton, ON who had found our balloon capsule in his corn field in late October.  We travelled up there on Saturday and retrieved everything – INCLUDING THE VIDEO! 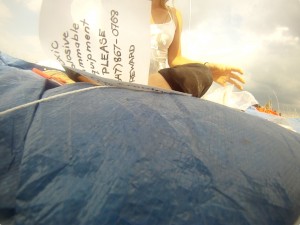 Unfortunately, the weather had destroyed the phone number on the side of the capsule, so he was not able to call us when he first found it and was (understandably) reluctant to investigate a white box that had fallen by parachute into his field. It was not until he opened up the box and inspected the camera that he was able to find the phone number and call us. And even then, it was only by chance that, as we started recording prior to launch, the sign containing our phone number was blown into view of the camera by the wind.  By watching the video, Leonard was able to find my number and notify me that he had found our capsule almost three months after we had launched it! 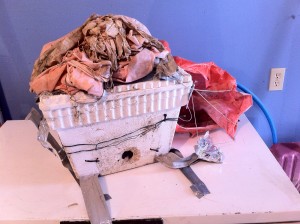 Meeting Leonard was an absolute pleasure because I could tell he was just as fascinated by this project as I was.  He told us everything he could about where the capsule was found and the condition it was in.  It had apparently landed fairly hard, but not enough to crack the styrofoam.  A small chunk was missing from the bottom where the foam was weakest, and one corner had a dent, but otherwise the structure of the capsule had remained intact.  The parachute was in good condition (although we obviously wont use it again) and although we could see some minor strain on the interior of the capsule lid, it clearly had no trouble supporting our load.

Leonard was able to power on the camera after charging (which was to be expected, considering the casing was waterproof and shockproof), and this was how he was able to find our number and contact us.  We were so excited about it that we transferred it from the SD card to my computer as soon as we got to the car. The footage the HD Hero camera captured is breathtaking.  Expect a full video to be posted soon. 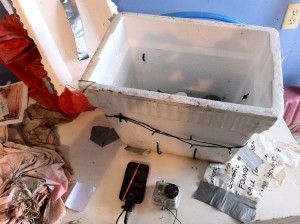 What really blew us away was the iPhone 3G.  Leonard said that when he had pulled the iPhone/battery out of the heated sock, the phone had become unplugged from the battery. The rubber case also appears to have a small section broken off of it where the elastic that was keeping the battery plugged in had come off.  Sadly, there is no way of knowing when the phone became unplugged from the battery, but given that the phone had reported 100% battery power during its last transmission this may not be important.  Other than the damage to the case and a fair bit of dirt, the iPhone appeared to be intact externally.  Curious to see if we could retrieve any logs from the phone, I plugged it in to charge and after about an hour of charging the iPhone 3G powered on!   It had spent nearly two months in a corn field, had endured at least some amount of rain and mud – all after travelling 100,000 feet above the earth and experiencing extraterrestrial environmental conditions – and all it needed was a recharge and it was good to go.  Color me impressed!

There were no crash logs on the device, however.  Nor were there any signs of software or mechanical failure.  Why the phone stopped transmitting is still subject to question.  I may just have to stuff it into the other heated sock and stick it in the freezer again.

Anyway, the important thing now are the photos!  Here are some screens from our capsule:

And here are all the photos we took during our road trip up to Newton.  Special thanks to Mitch for taking so many awesome pics!